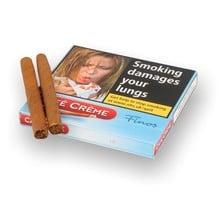 The instantly recognisable Cafe Creme Pack containing 10 Cafe Creme Finos blue smooth cigars (formerly light.) The new Finos range was introduced by Henri Wintermans in 2010 under the original name Express as they realise, that in the modern world people have even less time to enjoy their favourite cigars. The Finos are the perfect size for a quick smoking break (if the boss still lets you have one)

The Cafe Creme Blue Cigars are produced by Henri Wintermans using a blend of Brazillian, Columbian, Dominican and Java leaves before being wrapped in a bright Ecuadorian Leaf. There aren't many smokers who haven't enjoyed a cafe creme at some point in their lives.

The Cafe Creme cigars do not require cutting and can be enjoyed straight out of the pack.

Customers who bought this also bought ...